The Greencastle-Antrim Education Foundation held a Groundbreaking Ceremony, on Wednesday, April 21, 2021, at Kaley Field, for their new state-of-the-art, 3,000 sq. ft. building which will house ticket sales, concessions and restrooms.

President of the GAEF Board of Directors, Vernon McCauley, served as Master of Ceremonies for the event, and also co-chairs the GAEF Building Committee, along with retired bank president, Jeff Shank. Shank shared with the crowd the genesis of the project, and the partnership between the GAEF organization and the school district in order to undertake such a project. “Having put the Kaley Field project on hold for a year due to COVID, the GAEF Board never lost focus on getting this project completed”. He expressed his appreciation to the contractor by stating, “Many thanks to Eagle Construction for enduring countless changes and modifications from dealing with committees and donors.”

“GAEF is extremely appreciative to all of our donors for their financial support in making the Kaley Field Project a reality”, McCauley stated, as he introduced four of the major donors, each of whom offered remarks: Tim Henry, F&M Trust; Dean Martin, Sunnyway Foods; Greg Weaver, Antrim Way Honda; and David Rajtik, Antrim Insurance. Other Major Donors include: Dean Martin, Margaret Martin, Greg and Cherie Weaver, and Pamela Weaver Knepper.

Total to date, $487,000 of the $600,000 has been donated or pledged to the building project. It is anticipated that the project will be complete in time for the launch of the 2021-2022 school year. The GAEF Board plans to continue fundraising until the overall goal has been reached. Local businesses wishing to help underwrite the Kaley Field Project should contact the organization by emailing Executive Director, Dana Given, at office@gaefonline.org 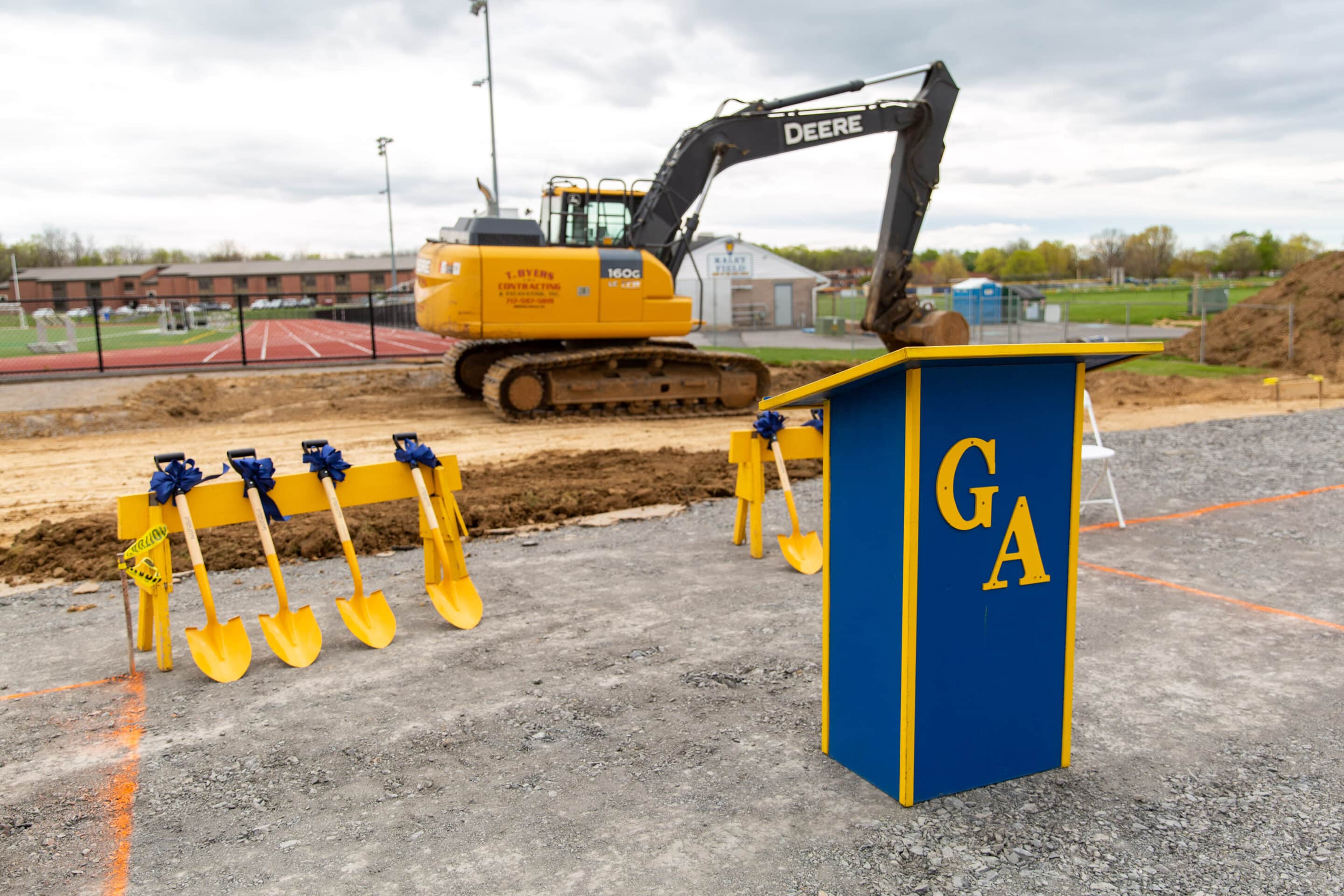 All set-up and ready to go on the cold and blustery afternoon. 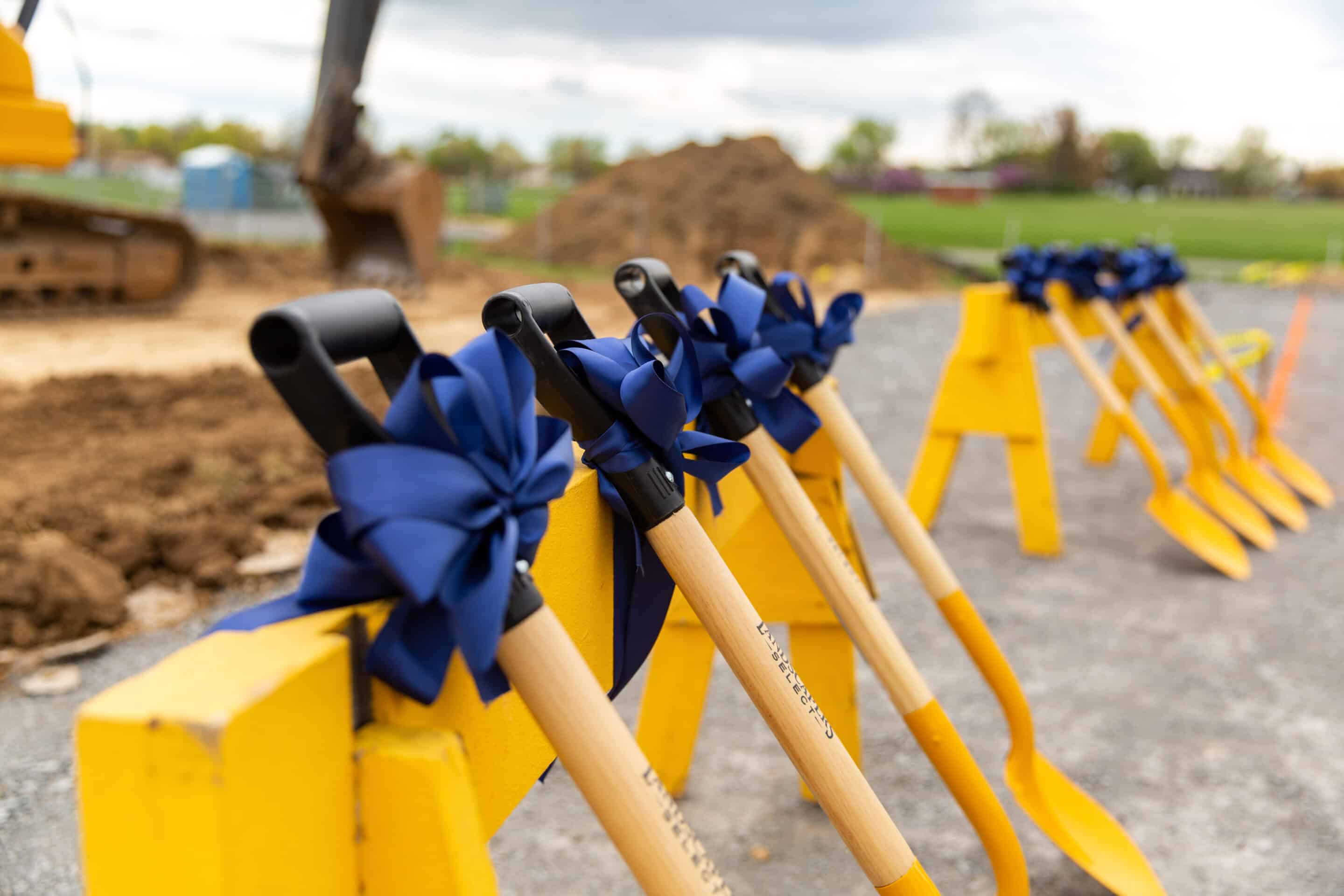 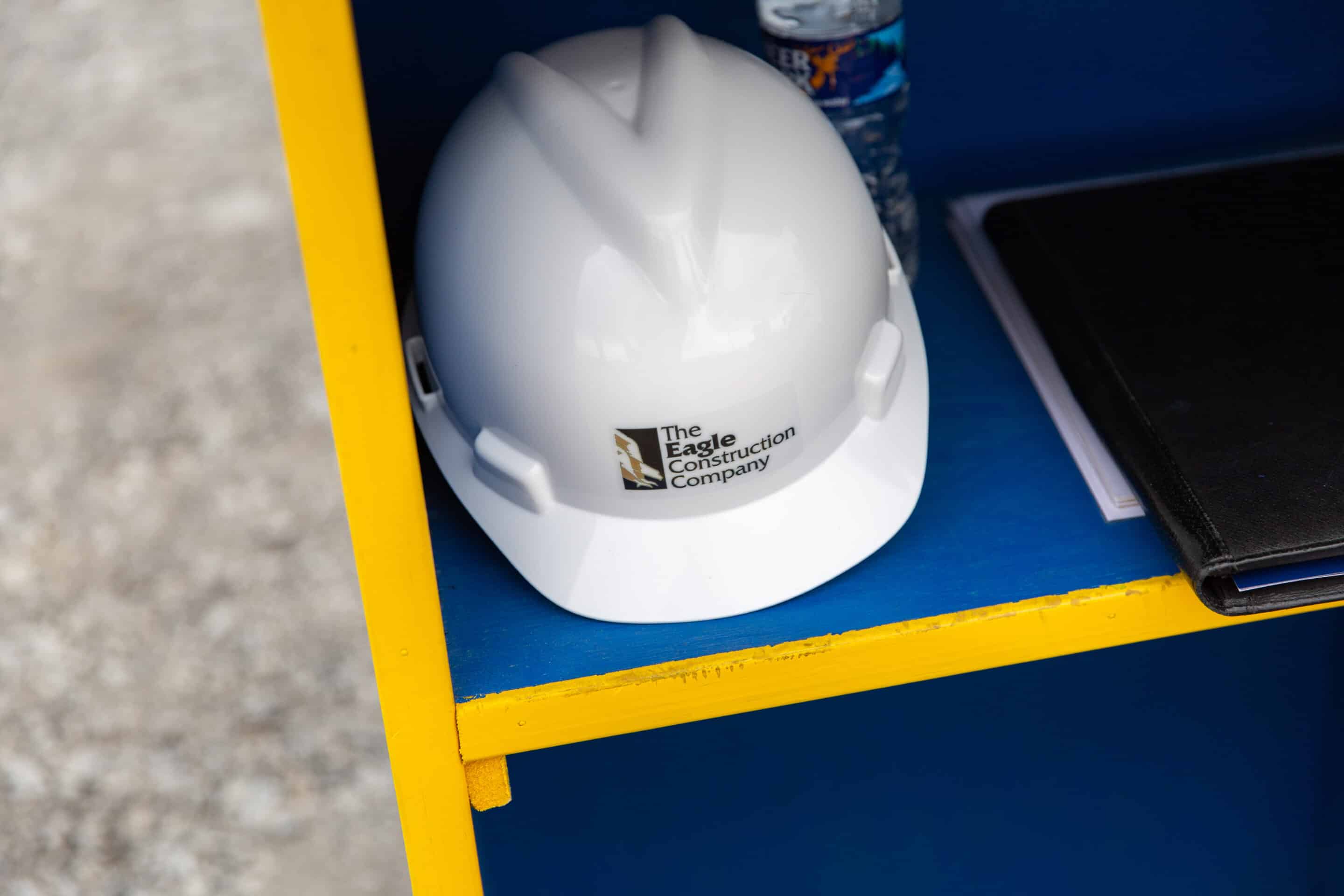 Eagle Construction, from Greencastle, was chosen as the General Contractor for the project. 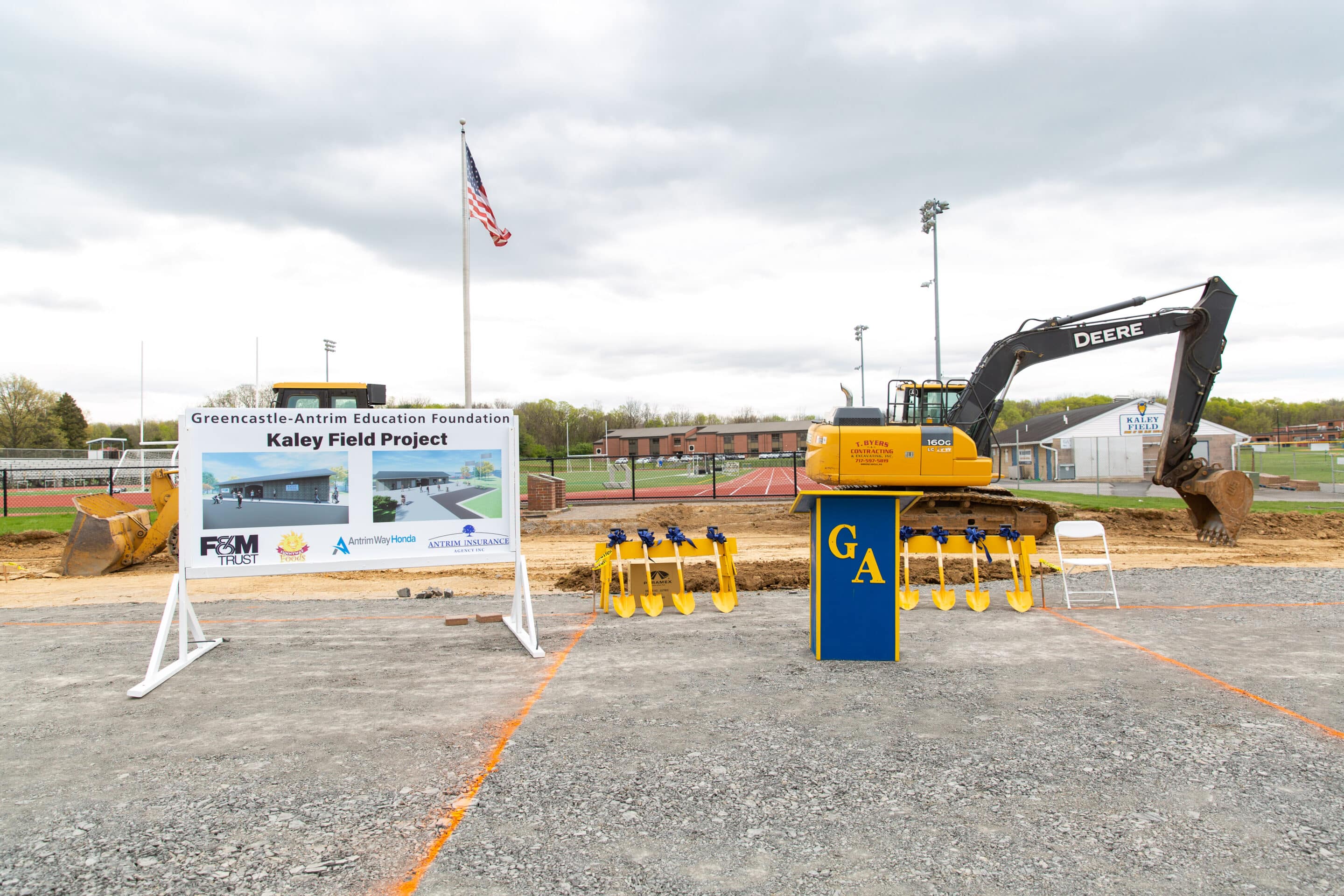 Special thanks to Graphics Universal for producing the signage and booklets for the Ceremony; and T. Byers Contracting & Excavating for supplying their backhoe. 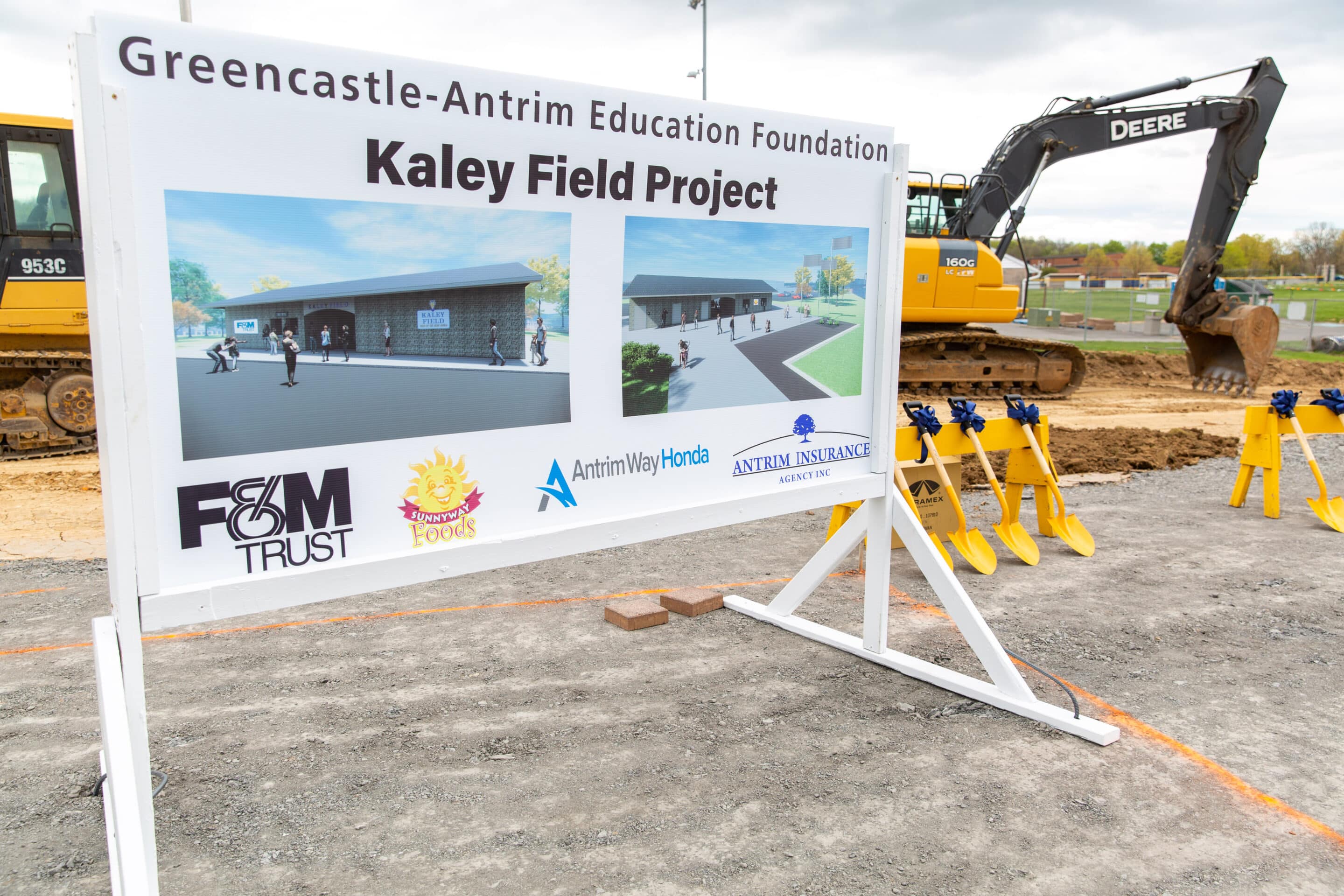 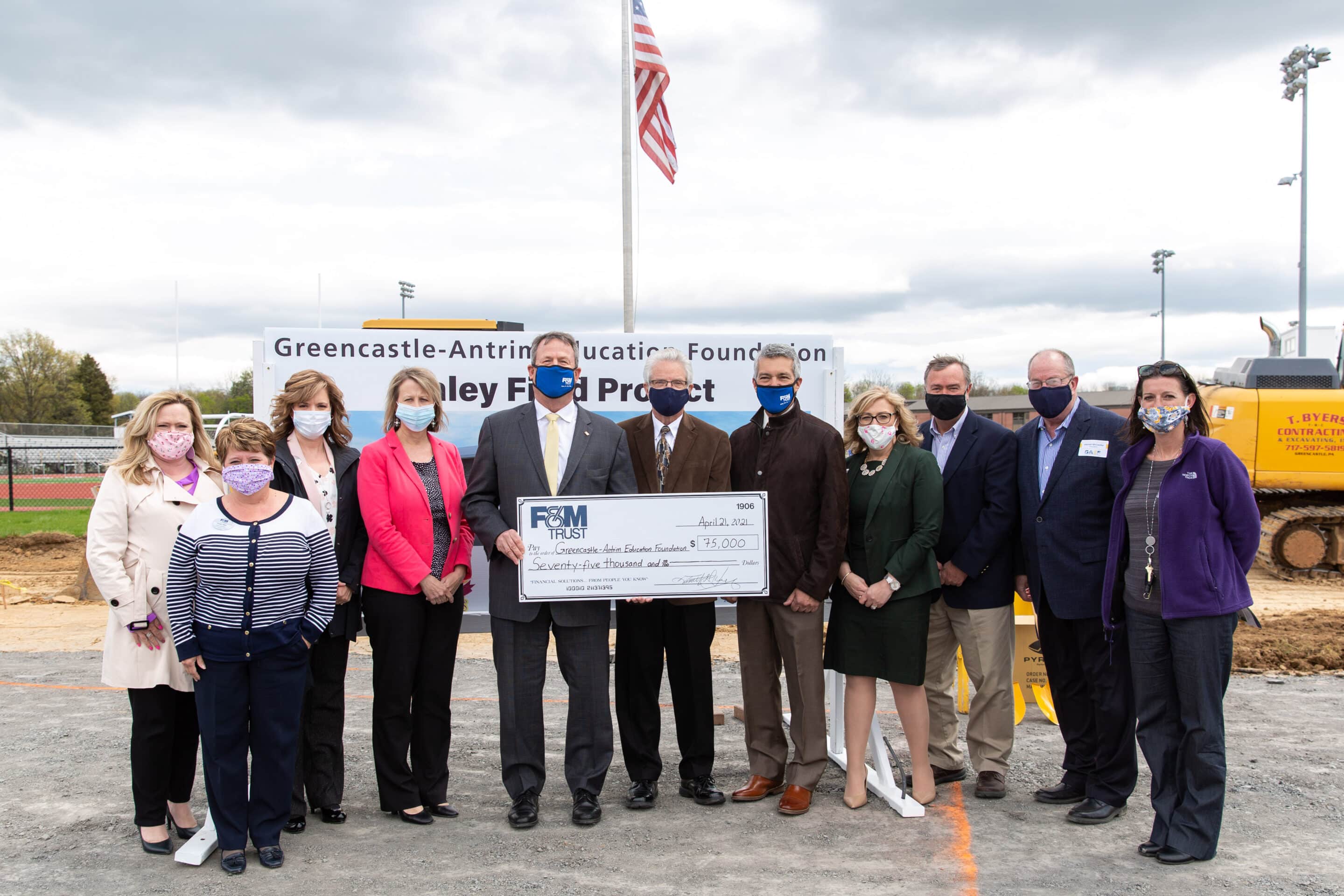 F&M Trust presented their ceremonial $75,000 big check, to represent their pledge to the building project. 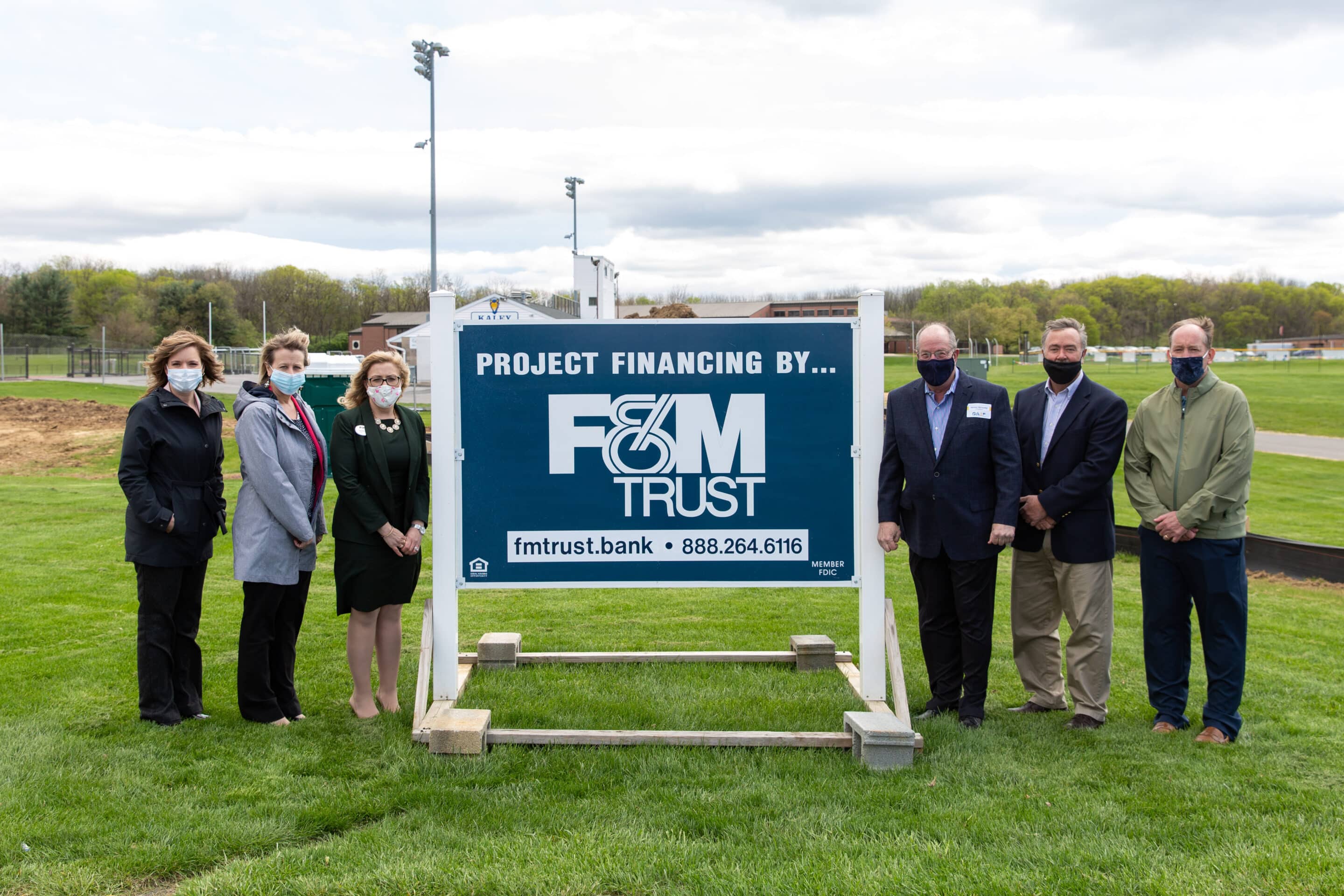 Representatives from F&M Trust were joined by Vernon McCauley, GAEF Board President and Co-Chair of the Building Committee, along with fellow Co-Chair, Jeff Shank; and Garon Gembe, immediate Past President of the GAEF Board of Directors. 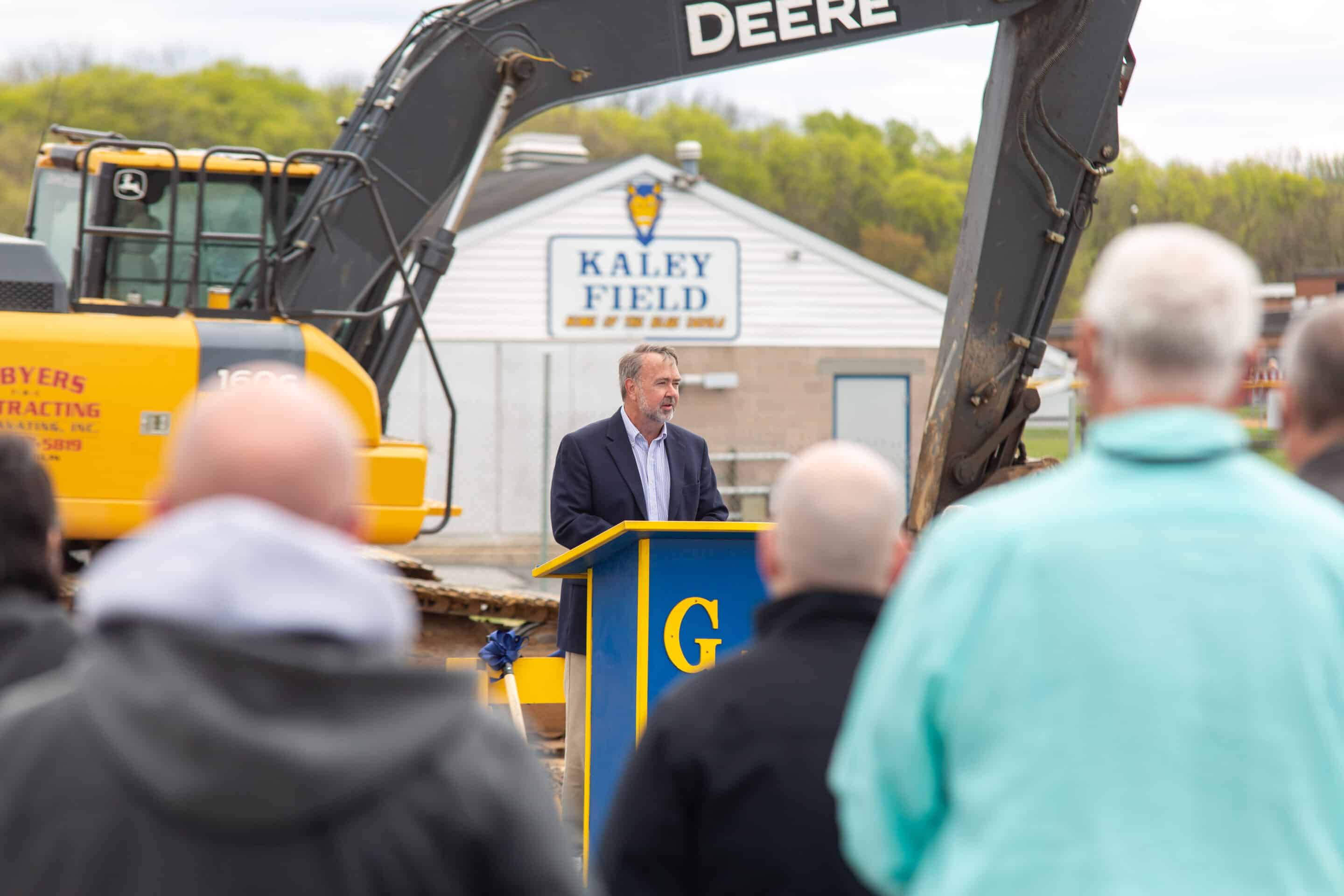 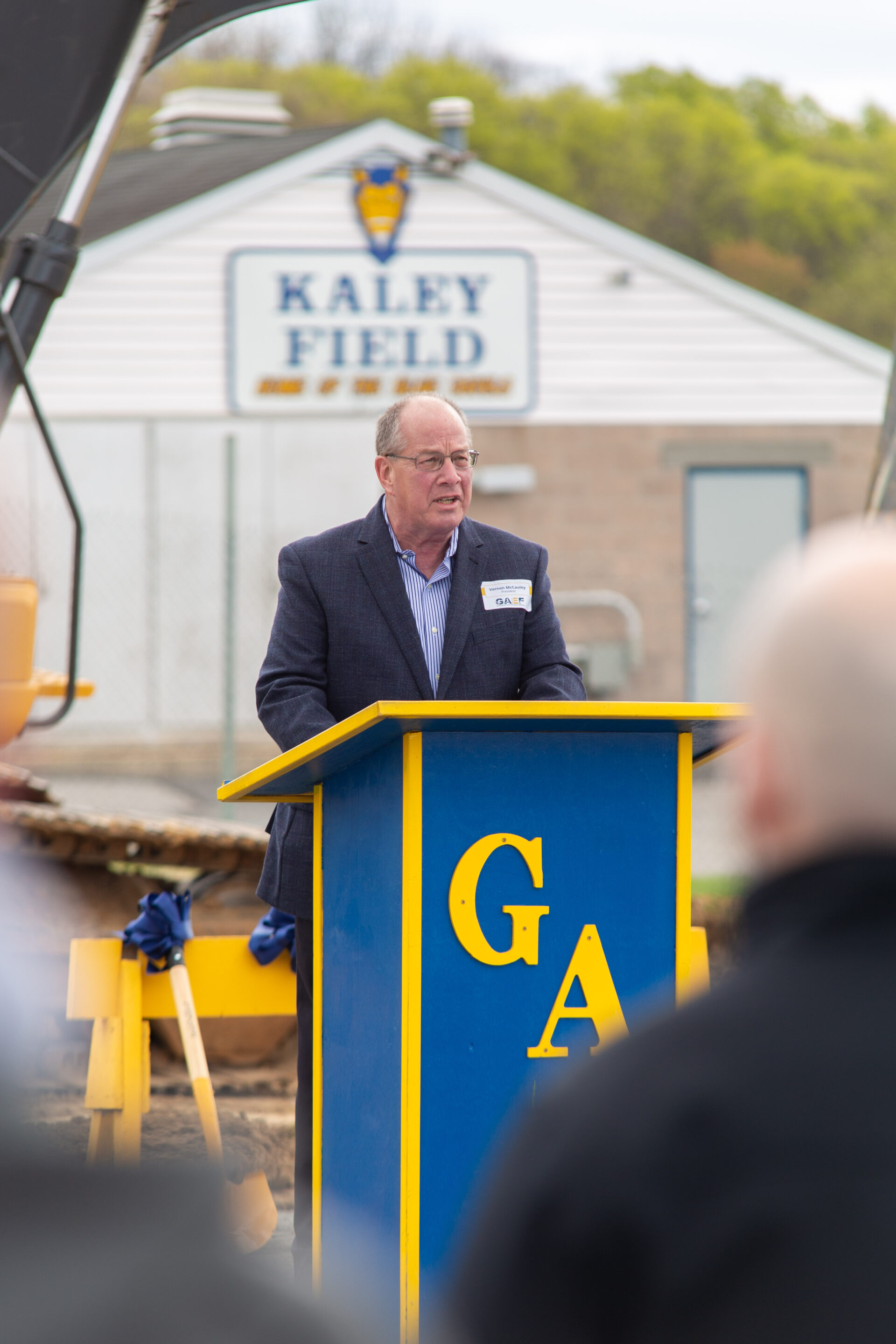 Vernon McCauley served as Master of Ceremonies for the event. 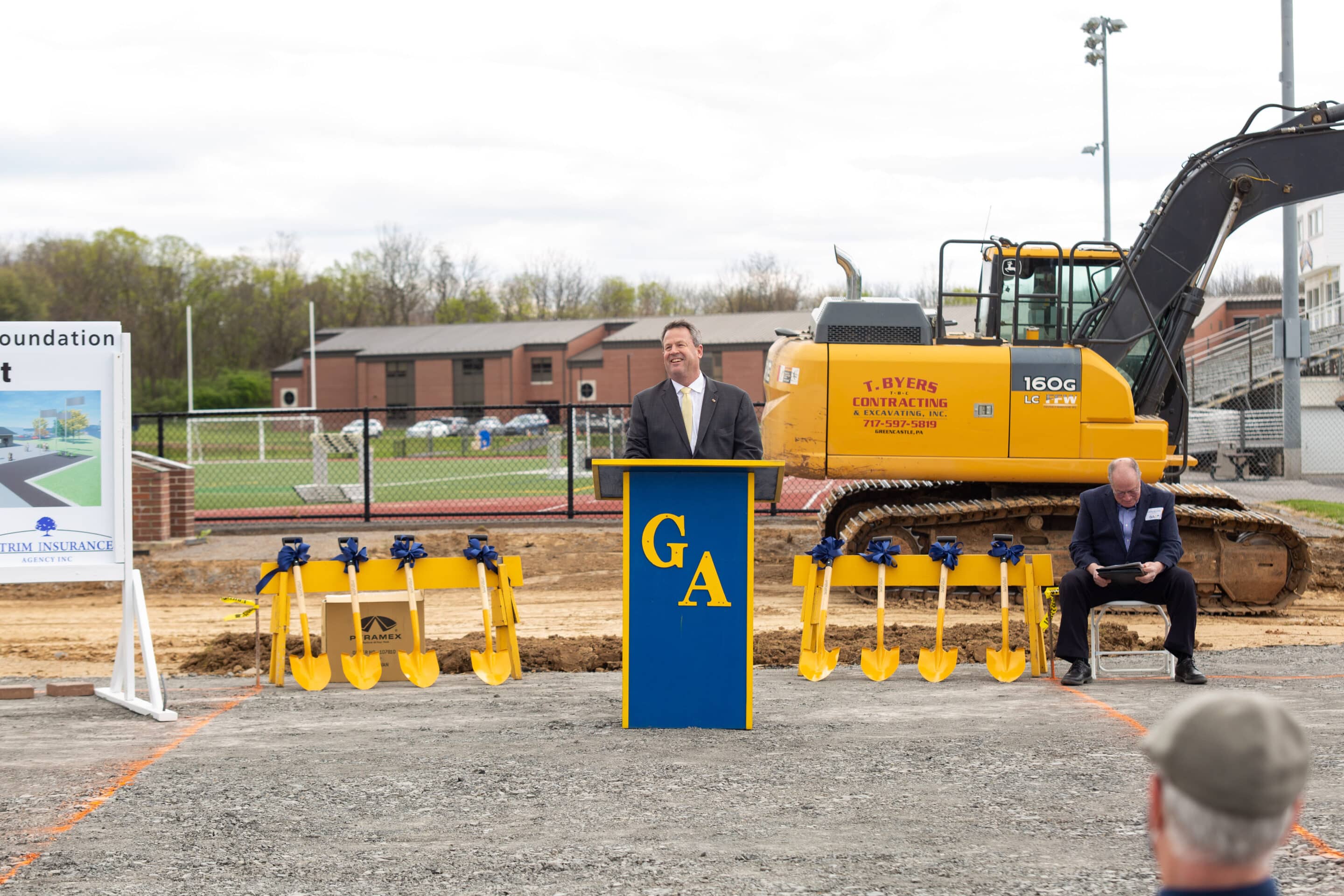 Tim Henry, President of F&M Trust, shared remarks about why they chose to get involved in the Kaley Field Project and chose to underwrite the Ticket Booth portion of the project. 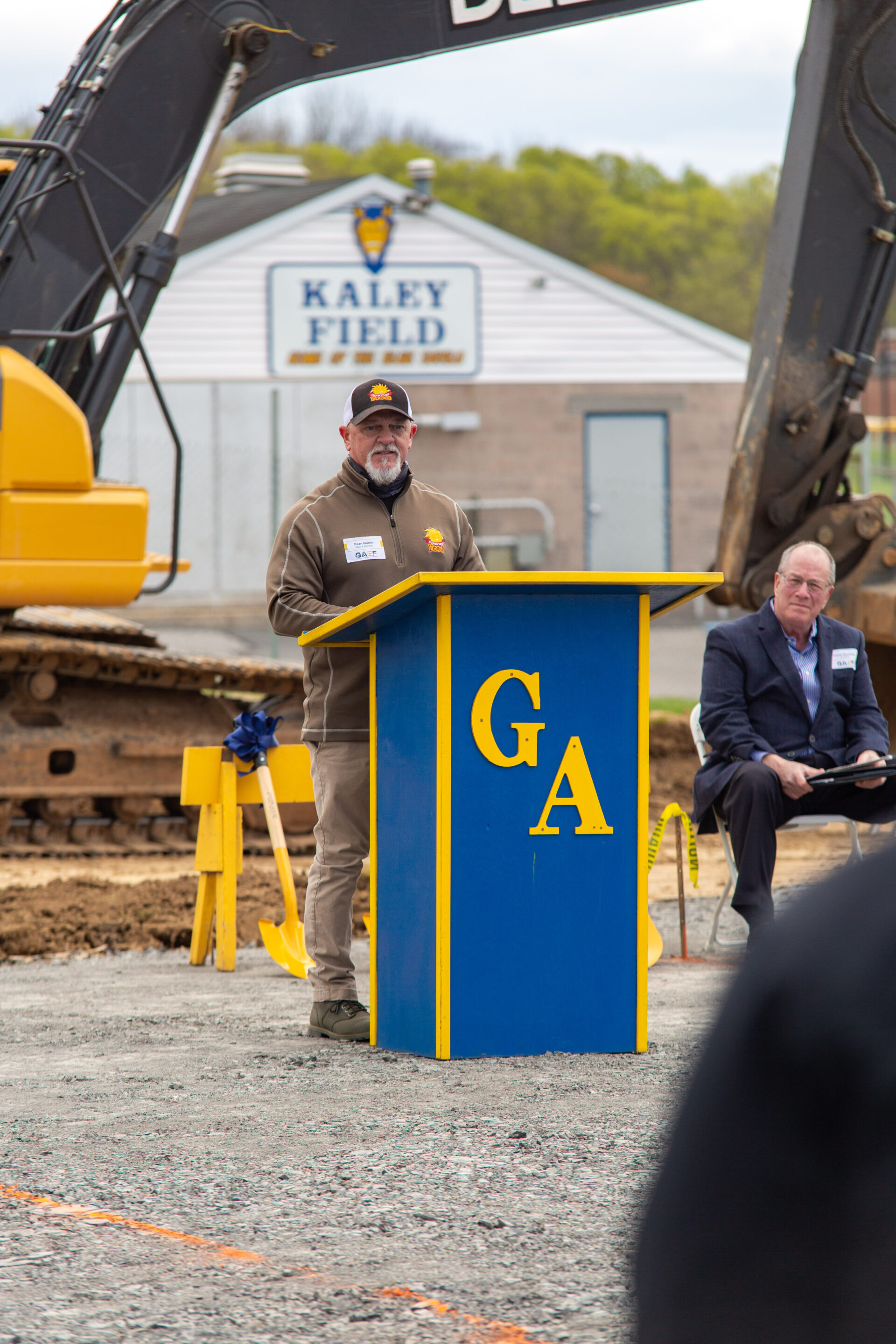 President of Sunnyway Foods, Dean Martin, shared why his business and his family chose to become major donors, to sponsor the Concession part of the building. 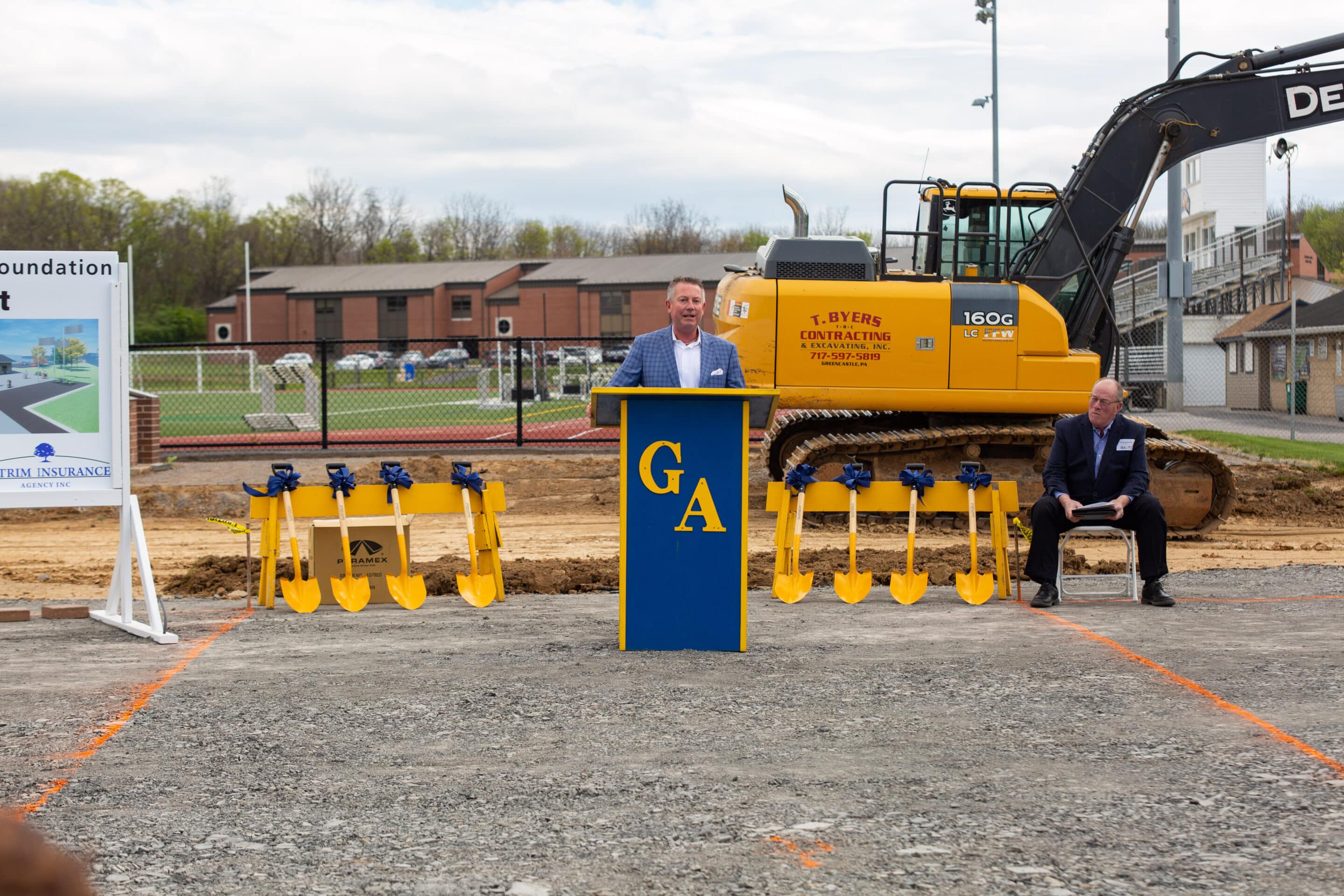 Owner of Antrim Way Honda, Greg Weaver, also shared why his business and his family opted to sponsor the Flag Court Area. 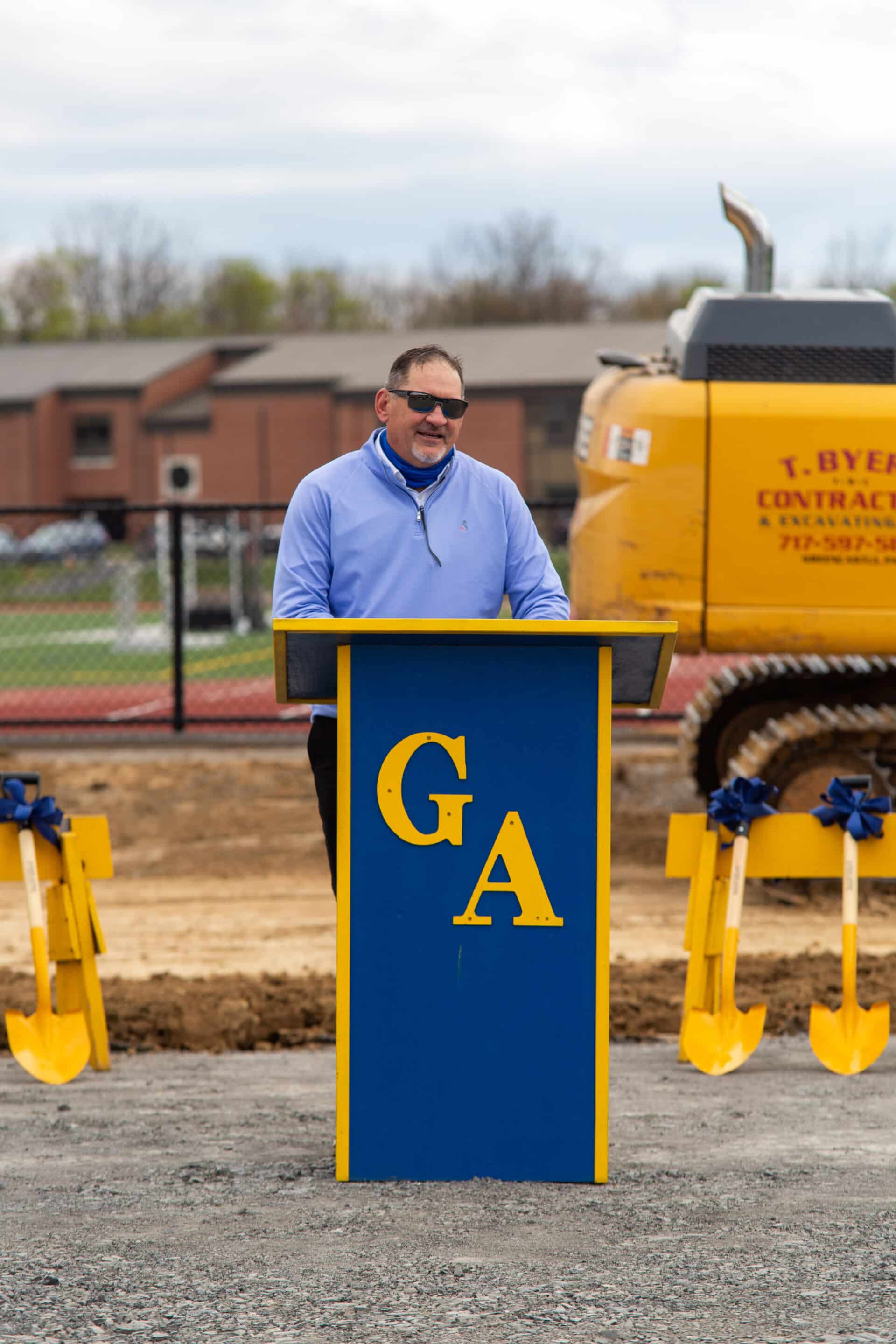 Antrim Insurance President, David Rajtik, also shared remarks about why his business chose to become a Major Donor on the project. 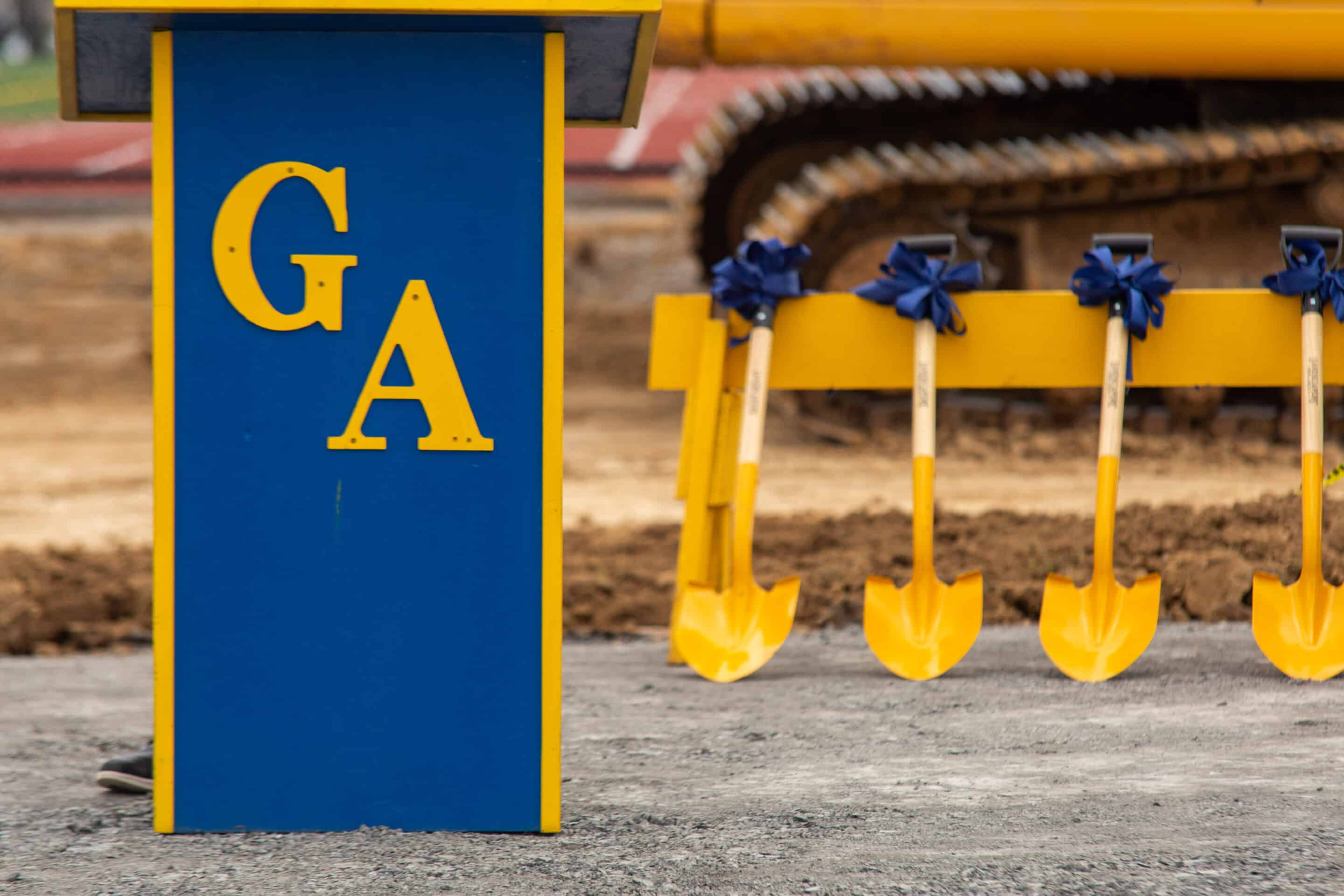 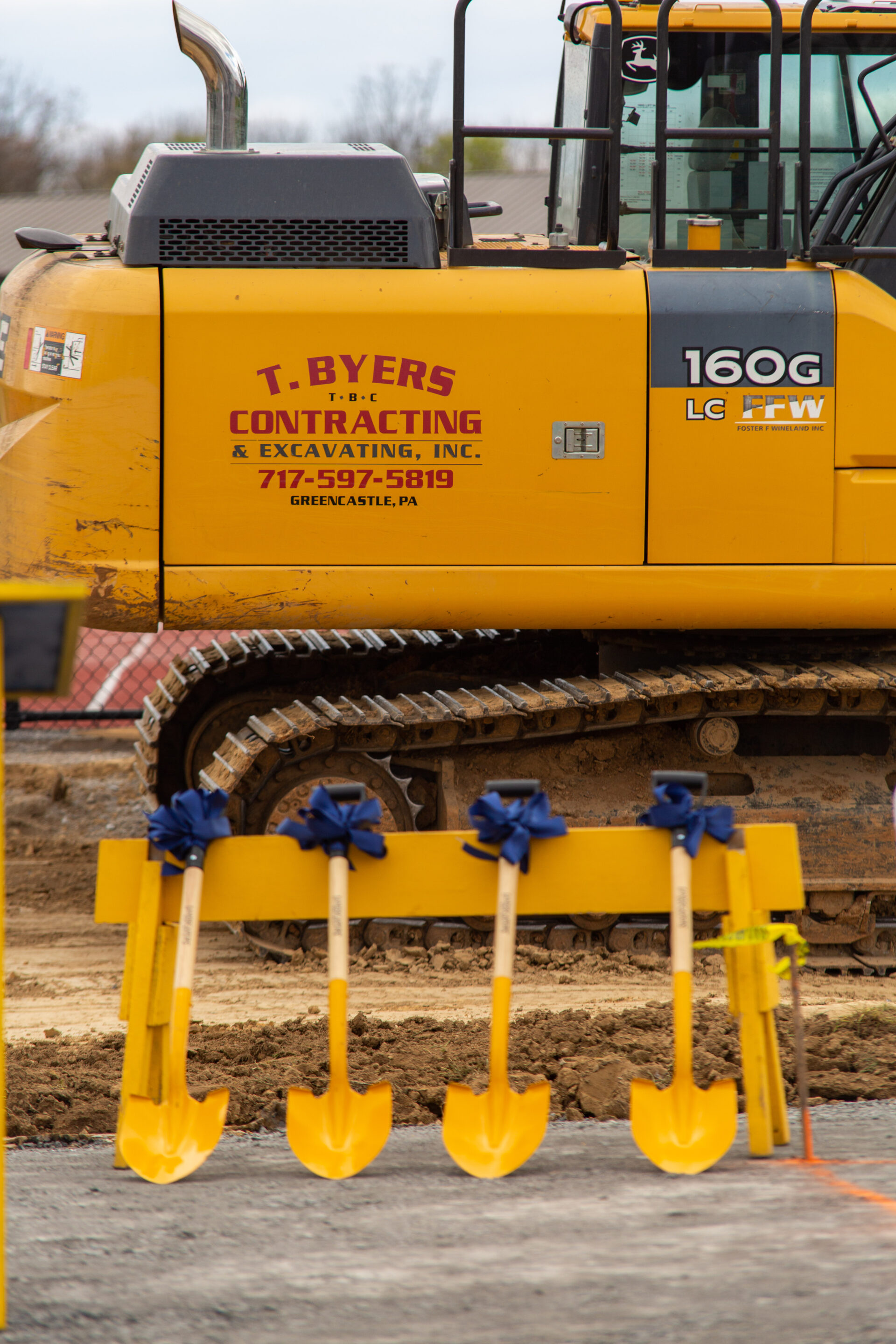 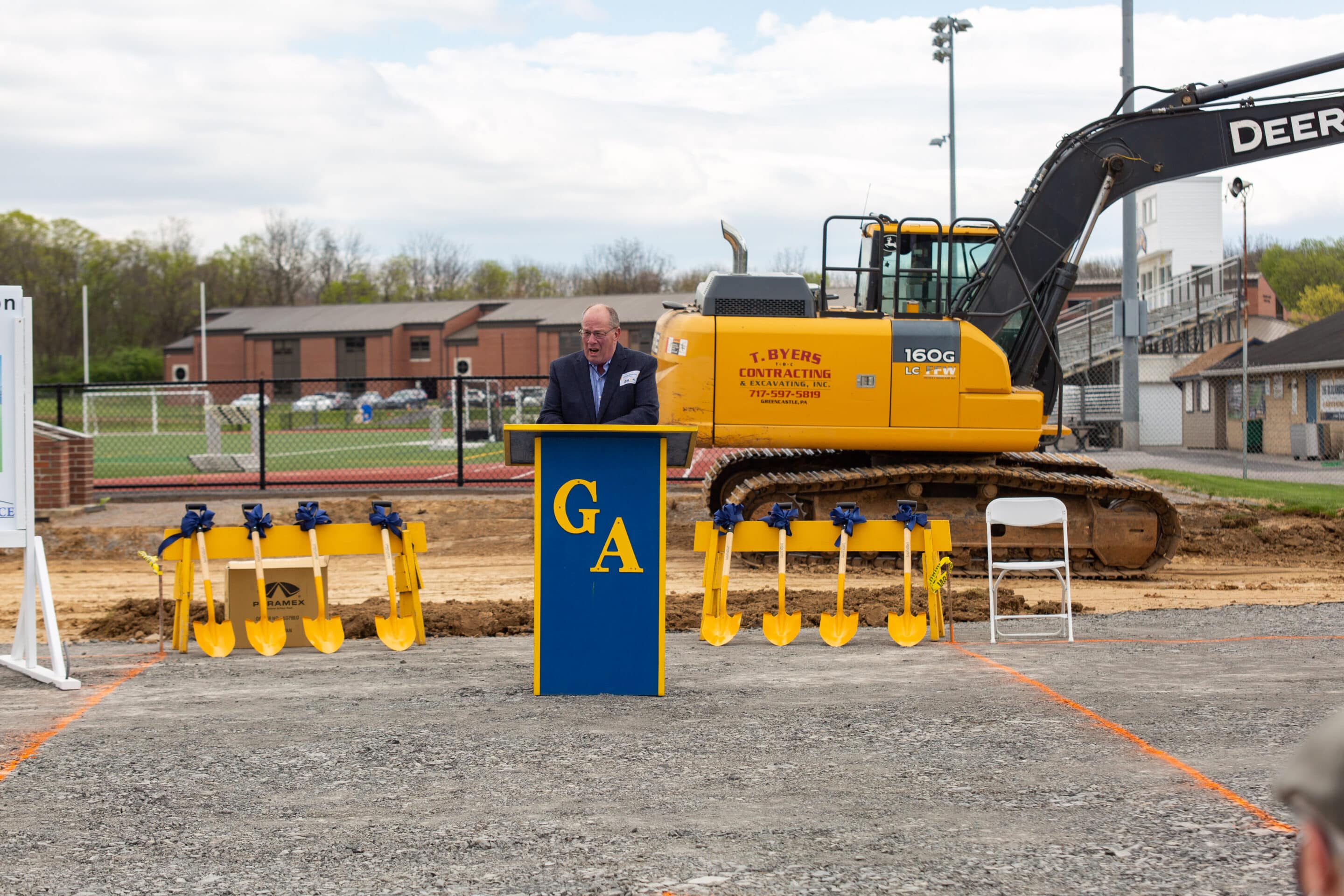 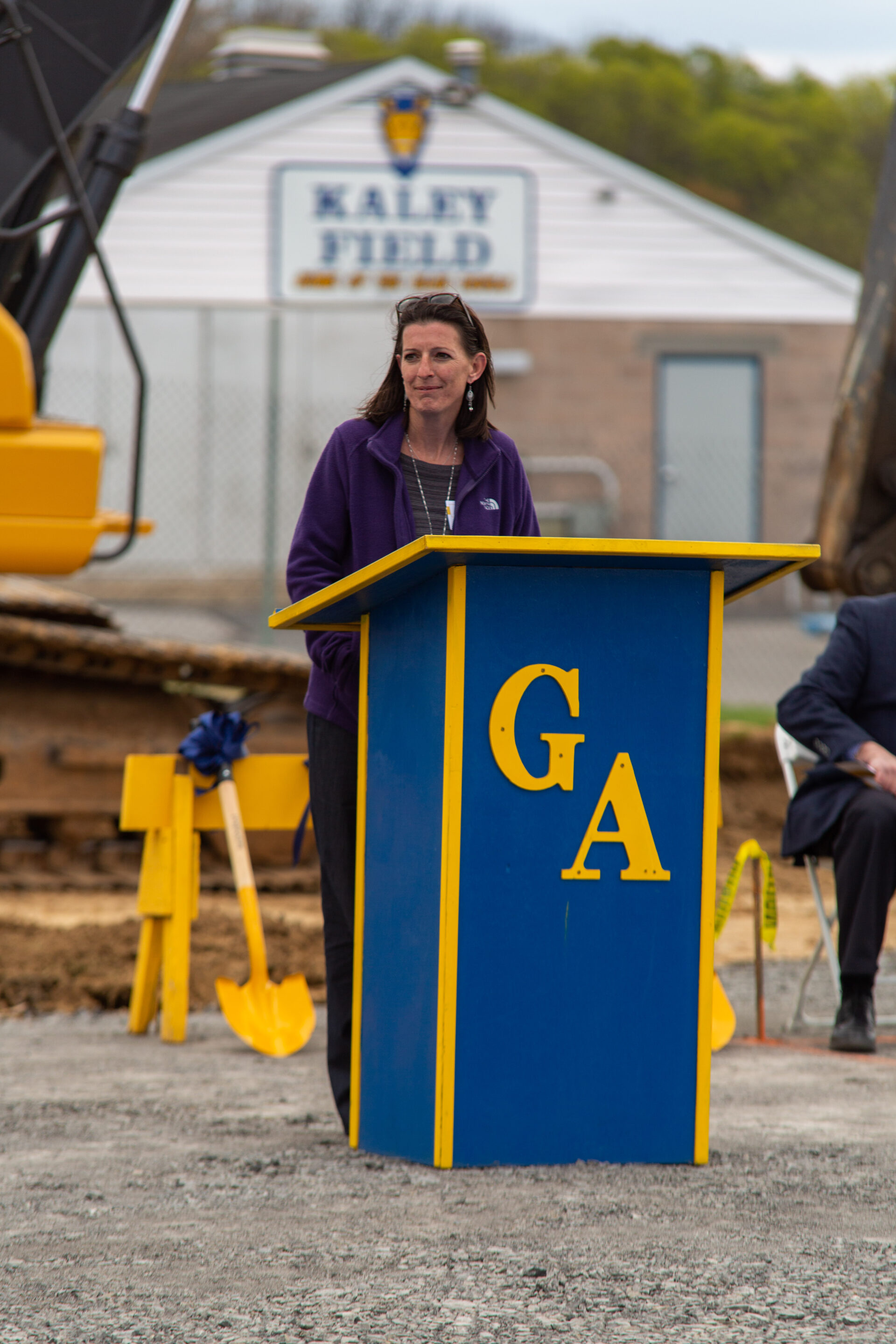 Dr. Lura Hanks, Superintendant for the Greencastle-Antrim School District, thanked the GAEF for undertaking this significant project on behalf of the District. 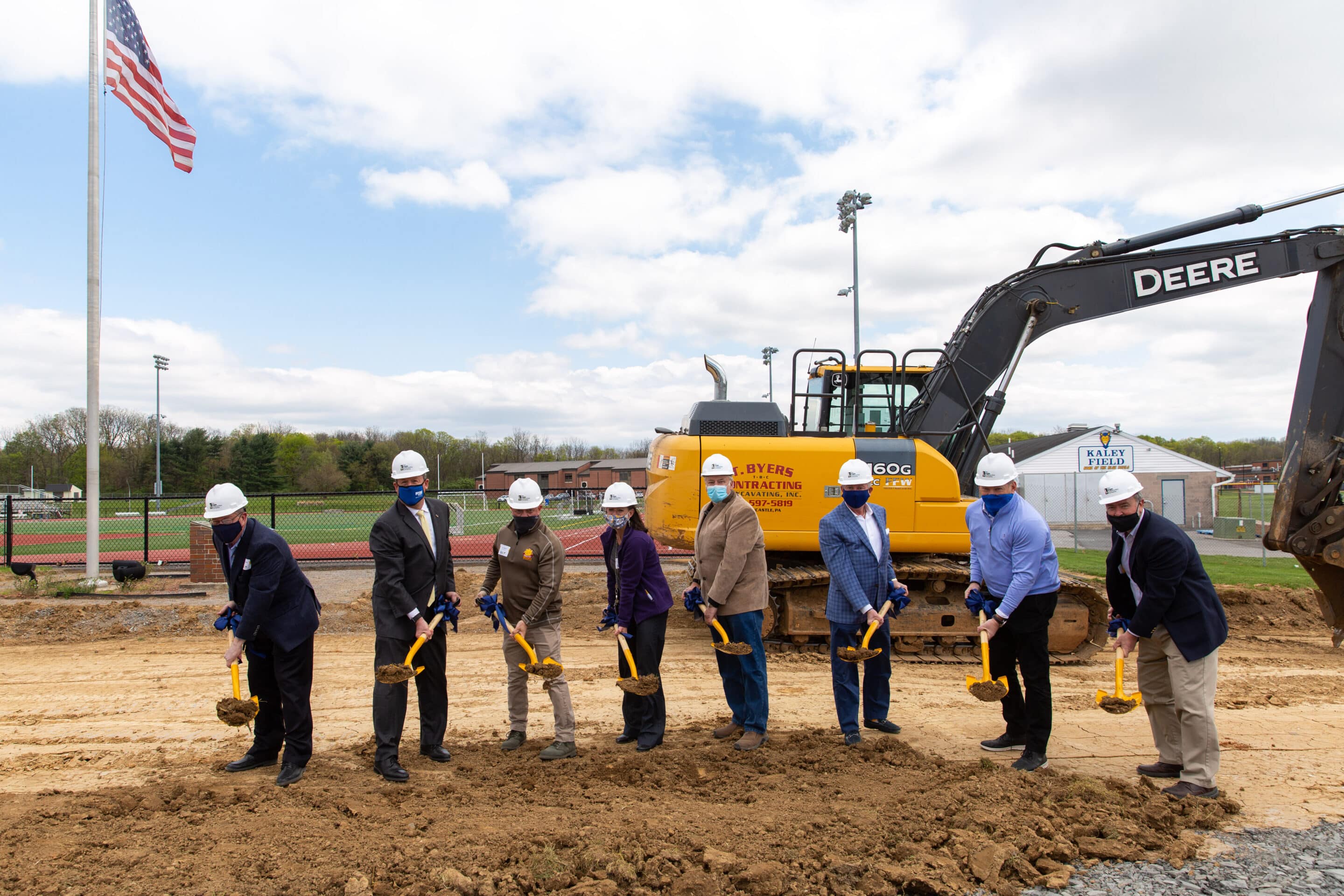 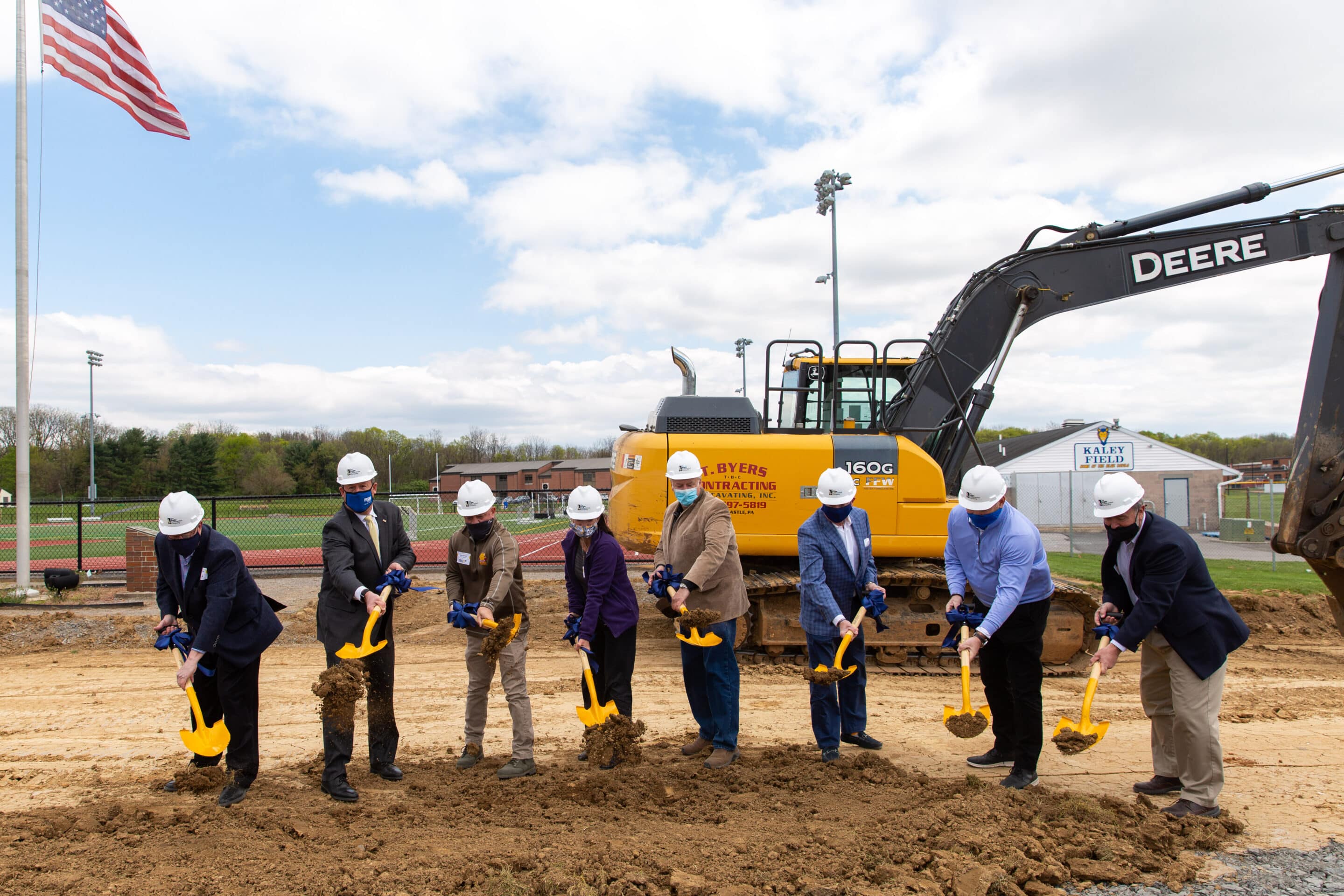 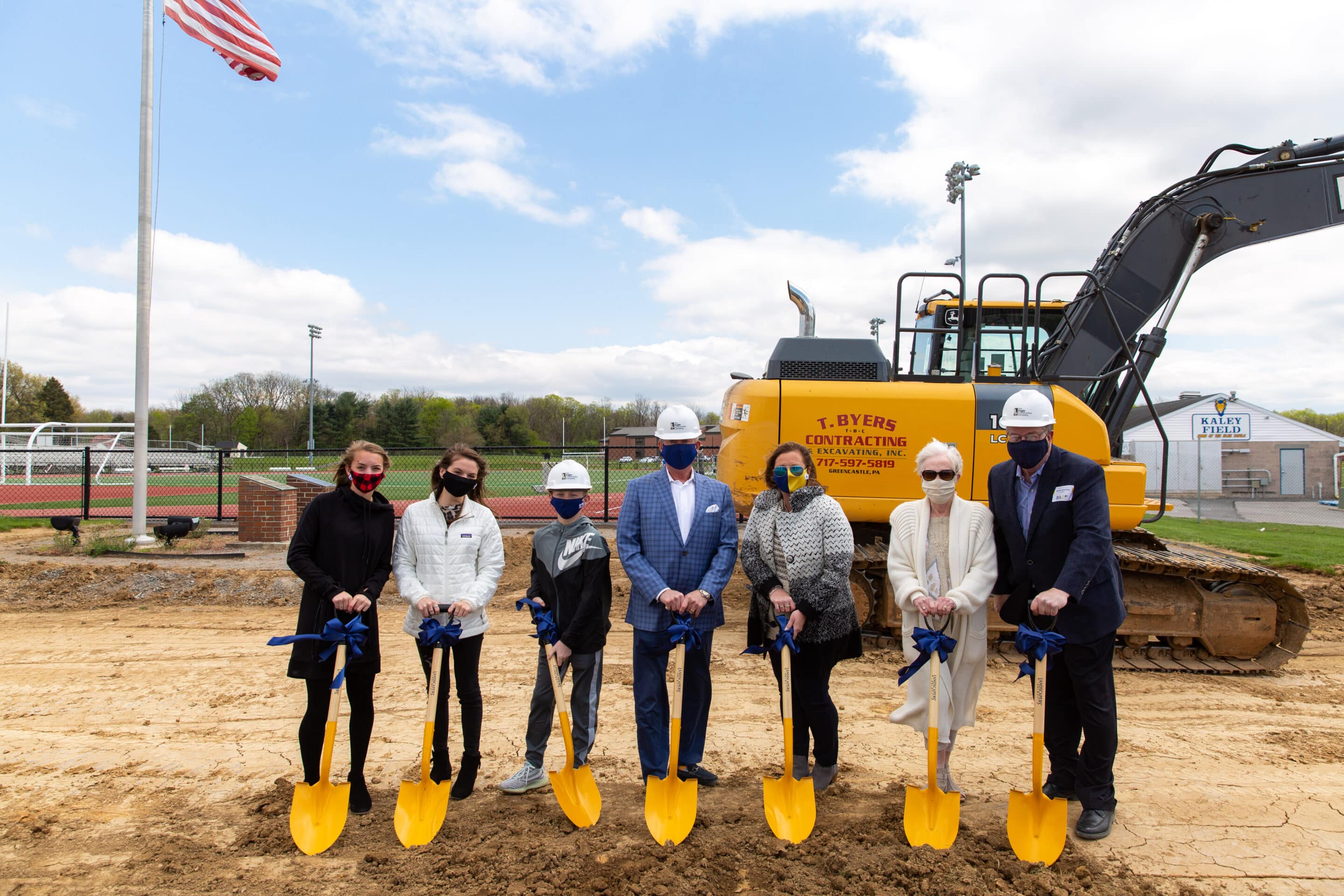 Greg and Cherie Weaver (in the center), along with their children (to the left) and Pamela Weaver Knepper, joined by  Vernon McCauley, GAEF Board President.

The Kaley Field construction project was scheduled to begin in the spring of 2020. Like many projects of the time, it was put on hold due to the COVID-19 pandemic. At points, over the past year, it was unclear whether the project could be resurrected. But, due to the extreme generosity of several local businesses and members of their families, along with the original major donors of F&M Trust and Sunnyway Foods, the project is back on track to be completed in 2021.

Joining the original major donors, Antrim Insurance, Antrim Way Honda, the Weaver Family, and the Martin Family have all given or pledged $50,000 or more to the project. Many others have given or pledged; still others are providing In-Kind donations, bringing the total donations to $487,000 of the overall $600,000 projected cost.

The need for upgrades became clear over six years ago, when a sewer line issue could not be repaired, forcing the Kaley Field restroom facilities to close, and portable facilities to be used in as a temporary measure. This need led the GAEF and the school district to contemplate broader improvement needs for the Kaley Field complex.

In addition to restrooms improvements that will promote cleanliness, like feature touch-free faucets, hand-dryers, and toilets; construction will also include a central complex access point with improved ticket booth and concession stand upgrades.

This state-of-the-art, 3,000 sq. ft. facility was designed to maximize the utilization of space and ultimately cut down on the overall original construction costs. This is especially true for the new concession stand, where Johnnies Restaurant Supply is lending their expertise by recommending layout and equipment options to maximize service of concessions to patrons.

Eagle Construction, of Greencastle, was chosen as the general contractor for the project and will break ground sometime in April. If the weather cooperates over the next few months, it is expected that the building will be completed in time for the 2021 school year.

Due to COVID-restrictions, a small Groundbreaking Ceremony will be held with the key stakeholders only: the donors, the boards of directors of the GAEF and the GASD, and local dignitaries. Leaders of the GAEF are planning a much-larger community celebration, if COVID-restrictions are lifted, when it’s time to hold a ribbon cutting, when the building is complete and the keys are turned-over to the school district.

For more information about how your business could donate to the project, please contact Dana Given, Executive Director, by emailing her at: office@gaefonline.org 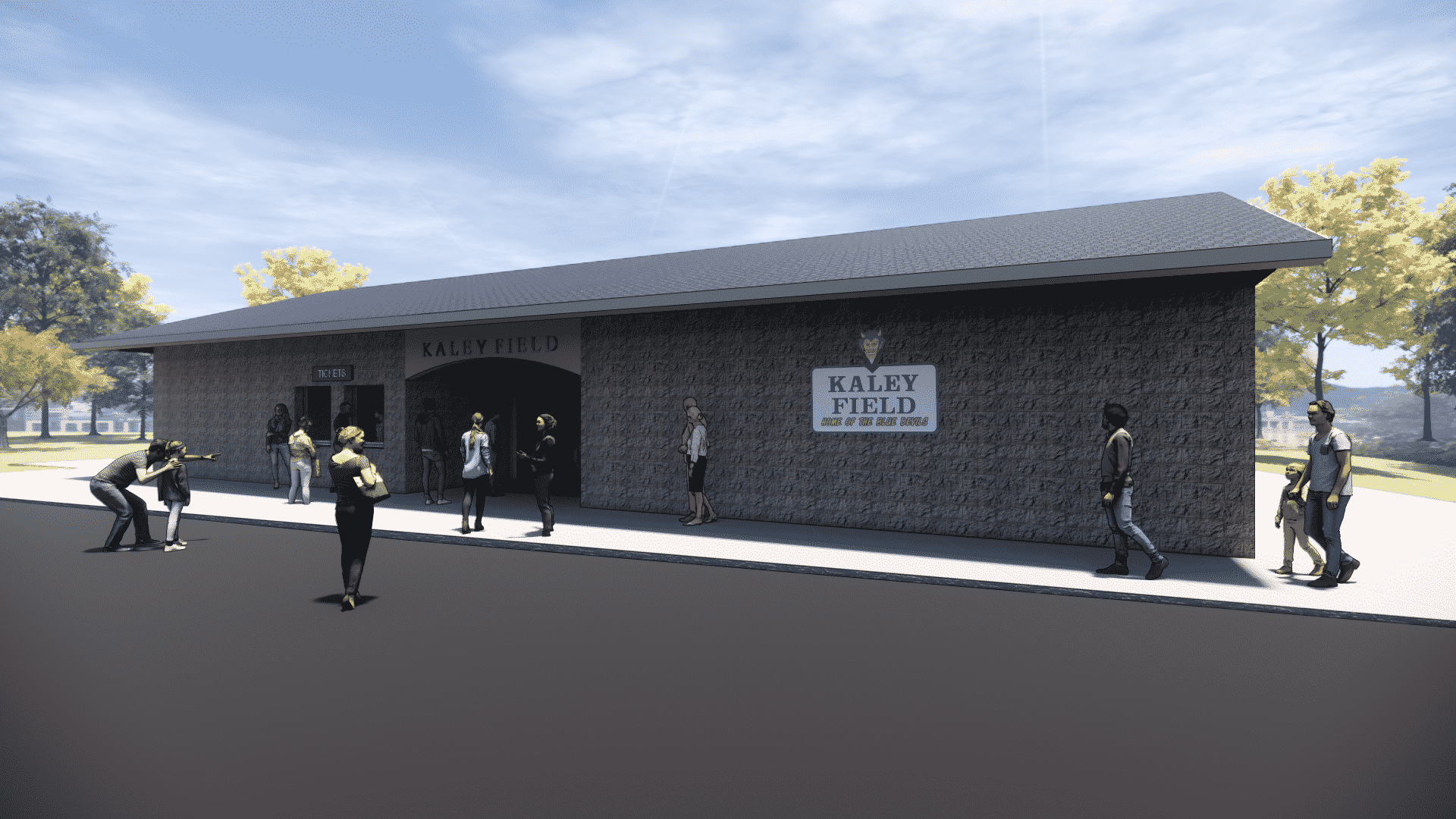 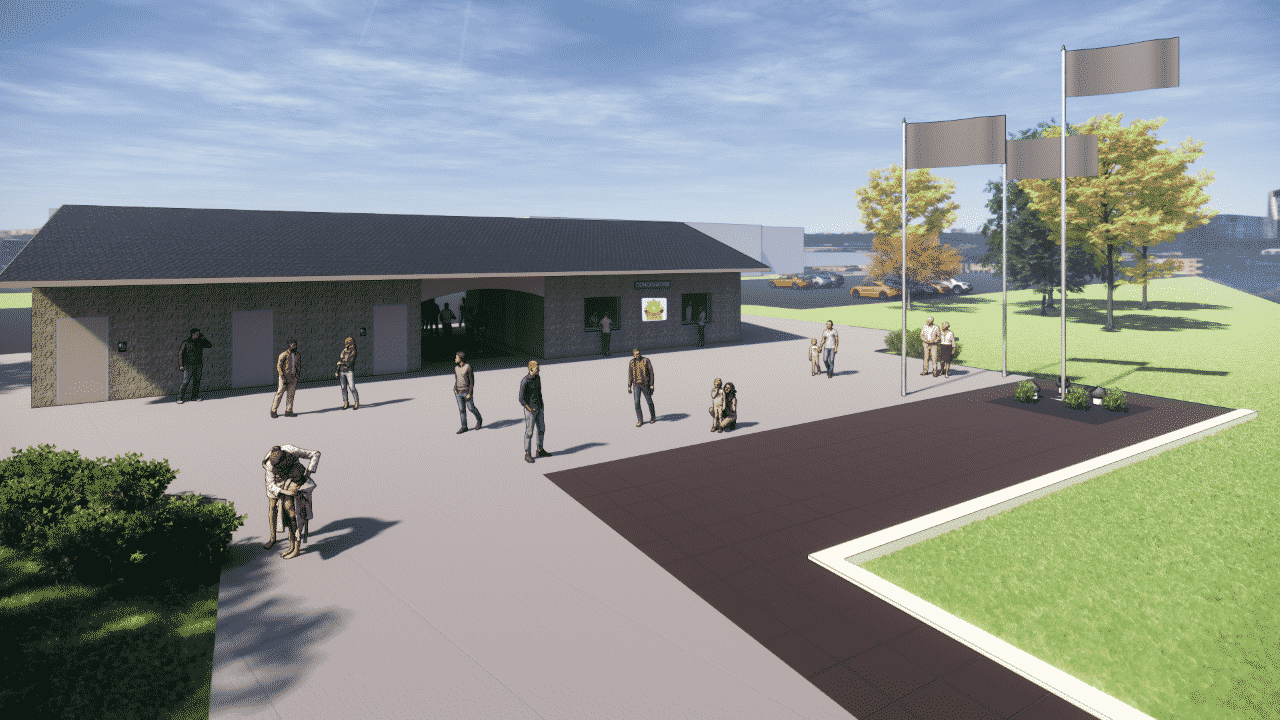 Pictured above are artist renderings of both sides of the building. The Ticket Booth and main entryway will greet guests when they arrive at Kaley Field. Once through the entryway, guests will be able to access the concession stand and the restrooms. A Flag Court Garden Area has recently been added since the artist renderings were created.